Has your boss ever subjected you to “radical candor”? Is your approach to work characterized by a “growth mindset”? Was your latest review “360”? 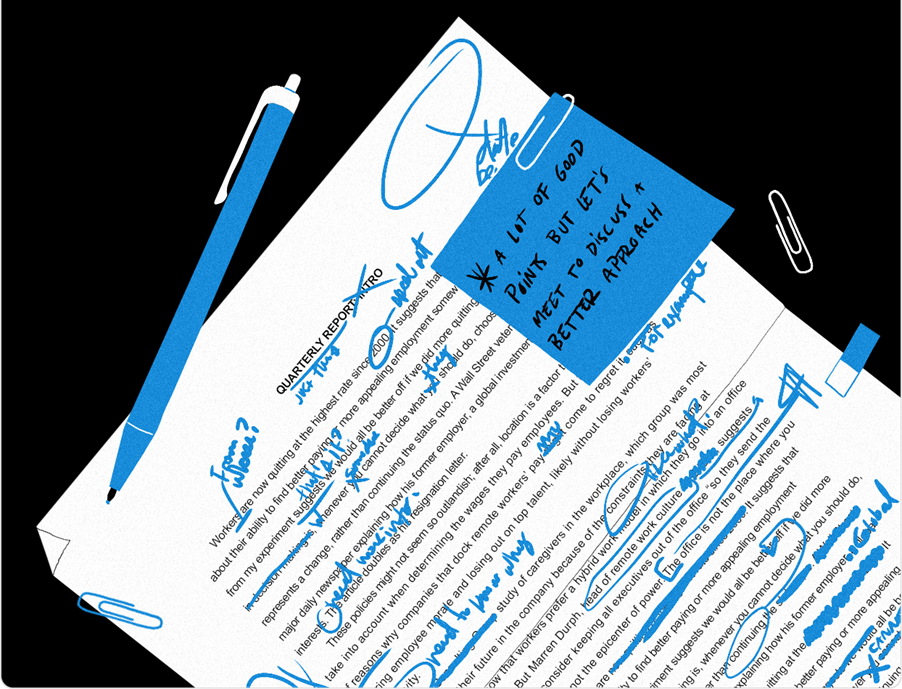 These buzzworthy approaches to employee development have put feedback front and center in the workplace. And much of the advice out there on feedback has focused on how a manager can best deliver an assessment of their employee’s performance. But that accords the person giving the feedback a lot of power, says Penelope Jones, a London-based career coach. What’s perhaps more important is how a person should receive that feedback, especially if it’s critical or negative.

Critical feedback can be a helpful tool for professional development, but it’s easy to get defensive when it’s delivered. In order to get the most out of that feedback, recipients need to assess how useful that feedback is, and then develop a strategy for acting on it.

“What I always say to my clients—I keep this in mind myself—is that feedback…is only ever somebody else’s opinion,” Jones says. “We get to go away and do the work to decide how much meaning we want to attribute to that.”

"Feedback is your relationship with the world and the world’s relationship with you, it’s the way that you’re impacting other people, for better or worse. So it’s all around you—the question is just whether you’re paying attention to it." - Harvard Law School lecturer Sheila Heen, a co-leader of Harvard’s Negotiation Project and co-founder of Triad Consulting Group

Whether you’re getting feedback informally (a passing comment in a hallway), or formally (an annual review), the most critical first step is to avoid deciding at that moment how meaningful it is to you.

Unless you’re a surgeon or a bomb defuser, it’s very rare that “feedback is so incredibly important that you need to act on it in the moment,” Jones says. Rather, when you get a person’s notes on your work, start by listening. Then, clarify your understanding of what the person is saying by asking for real-world examples.

Finally, thank the person, even if you don’t like what they said. “In that moment of thanking that person, you’re recognizing that they’re a human being, and that might have been an awkward thing for them to have said,” she advises. “You’re not agreeing, you’re not accepting the feedback, you’re not taking it on board, but you’re thanking the person for caring enough to speak up.” This reminds you that the person “is fallible,” Jones says. It also helps you avoid overreacting, being defensive, or committing to some behavior changes you might regret down the line.

Now that you’ve bought some time, create some distance.

Even if it’s well-intentioned and valuable, feedback can be fraught. It could be inaccurate, or tinged with overt or subconscious bias. So how do you decide if it’s valuable?

First, remind yourself that feedback “is only one facet of who you are,” Jones advises. Think about some of your positive attributes to remind yourself that what you’ve just heard fits into a bigger context. (If the person you’ve heard from is good at feedback, they might already have done this for you, Jones says.) This helps balance the critical feedback out and gives you some perspective.

Then, you’ll want to put the feedback in context to understand how productive it might be. Did you ask for or invite this feedback? Who gave it, and what is their relationship to your work? How did they provide the feedback—did you get a sense that it was thoughtful, and genuinely well-meaning? Is it relating to a moment or time or is it ongoing? (The latter is more helpful). And, is it functional—about how you do something—or personal, about how you are? Being told you need to be a different person is not particularly helpful.

If the answers to these questions help you determine the feedback is pretty well-intentioned and potentially useful, then you can move onto the next stage.

The next step is to collect some data and information from trusted members of your “career community” (colleagues, sponsors, mentors, peers, and so on). “Ask them if they recognize this behavior in you, because then you are not thinking about making a change off the back of a single person’s view,” Jones advises. “Different people from different backgrounds, who think in different ways, or who approach who you are, and who you are in the workplace differently could give you different, very valuable lenses on exactly the same piece of feedback.”

STEP FOUR: TURN THE FEEDBACK INTO A GOAL

You can either do this step on your own or with the help of the person providing the feedback. Craft your objective by asking yourself:

“Goals by their nature need to be achievable, and need to have a structure or a plan attached to them, otherwise they’re just a dream, or an idea, or a thought,” says Jones. This process means “you’ve turned [the feedback] into something tangible, you’ve worked out what you need as a result.” Sometimes this is easy and can be done in a week. Sometimes this can take a while—you don’t just change your communication style overnight, for example.

STEP FIVE: RETURN TO THE SOURCE

If you’ve determined the feedback was terrible, or biased, you can stop there. Otherwise, as a final step, Jones advises returning to the person who gave you feedback.

Telling someone you’re turning their feedback into a goal will help them learn what was valuable in the initial conversation, and will encourage them to keep helping others. This conversation can also bring that person deeper into your career community, and help hold you accountable to your goals.

What if you’re not accepting the feedback? Jones still encourages you to return to the person to let them know (although she adds that how you decide to do so will depend on the context.) You might have decided the feedback is not relevant to you right now, or not a priority with other things going on. Explaining your thoughts to the person recognizes that feedback can be an ongoing conversation. It also lets them know their feedback was considered, and they did a good thing. “Everyone likes to have their input recognized. Bringing people back in allows you to recognize each other human to human. It makes it more likely that they will [give feedback] again. And it builds your career karma a little bit

The steps outlined by Jones above are helpful protections against what some experts call the “fallacy of feedback.” In this article for the Harvard Business Review, leadership experts Marcus Buckingham and Ashley Goodall break down three theories behind feedback that the business world takes for granted: that experts can provide truthful feedback, that feedback is critical to help employees learn skills they don’t have, and that performance and excellence can be objectively measured.